Time to finally show off over 1 years work. The small fiddly parts, tight fitting, light show more known as Issac Clark – Dead Space 2. It took BlueJam77 and my father around 30 minutes to suit me up. Some small issues when putting him on but all worked out. The damn leg cylinders on my right thigh attached with no issues and stayed in place! Finally! 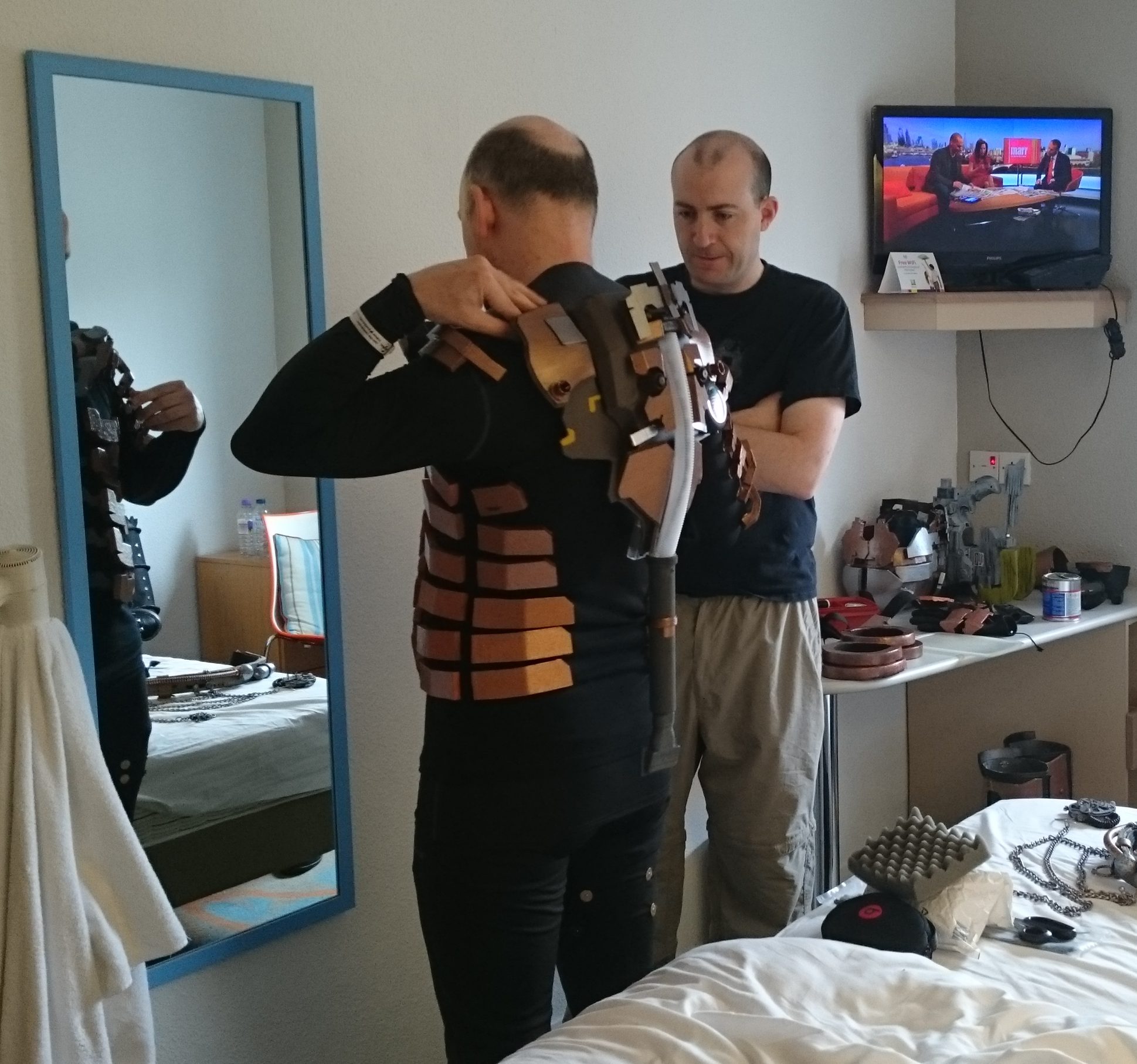 Myself and Bluejam77 were entered into the masquerade in the performance category. I have been working on my skit for 7 months so my fingers were crossed #watchthisdeadspace! Time to walk to the convention. 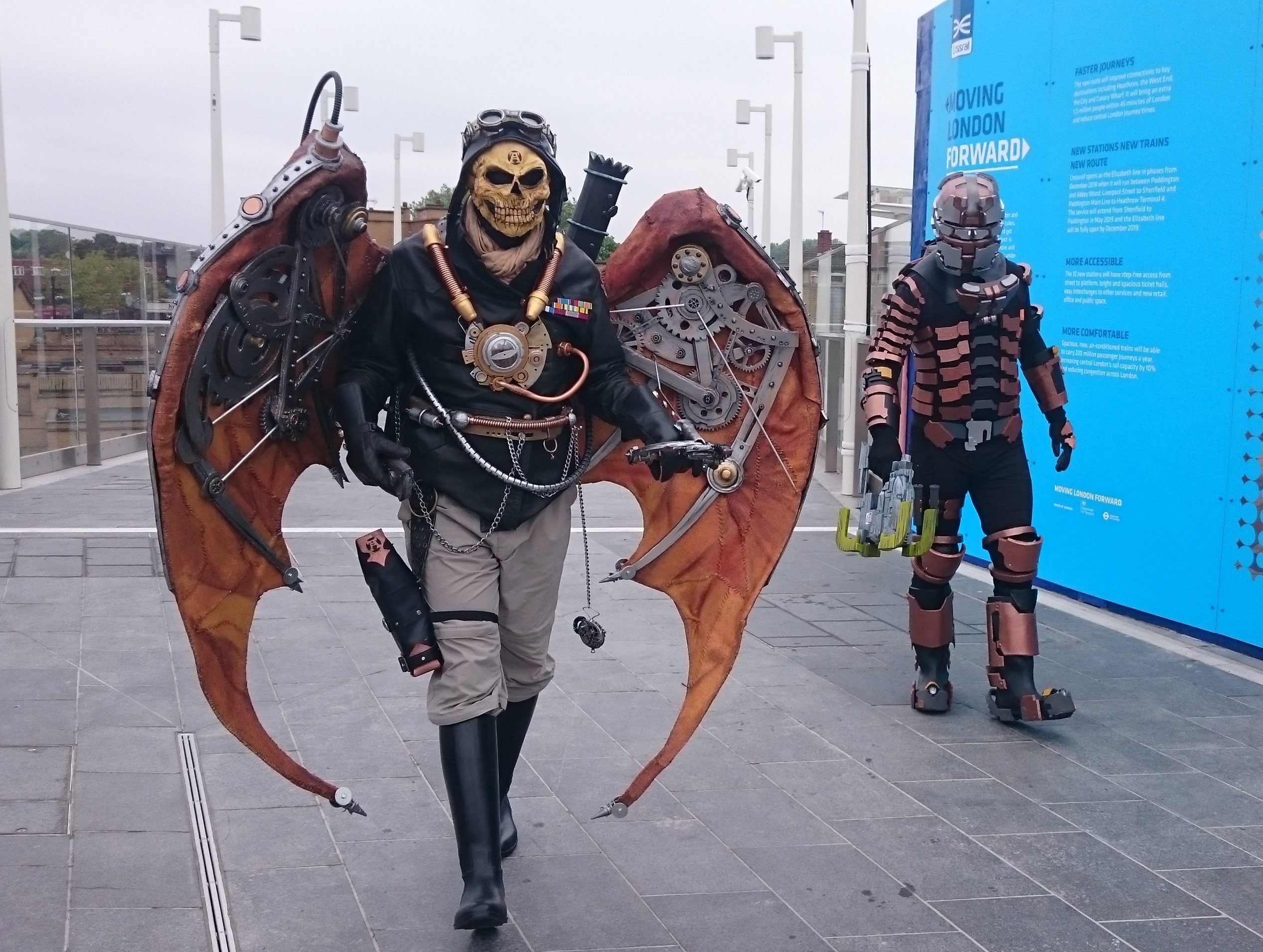 Once at the MCM we went straight to judging. This because we did not want our costumes to fall apart before judging.  I had a RIG on my back and I was worried people would knock it damaging all the small parts. Cool queue one – Judging. 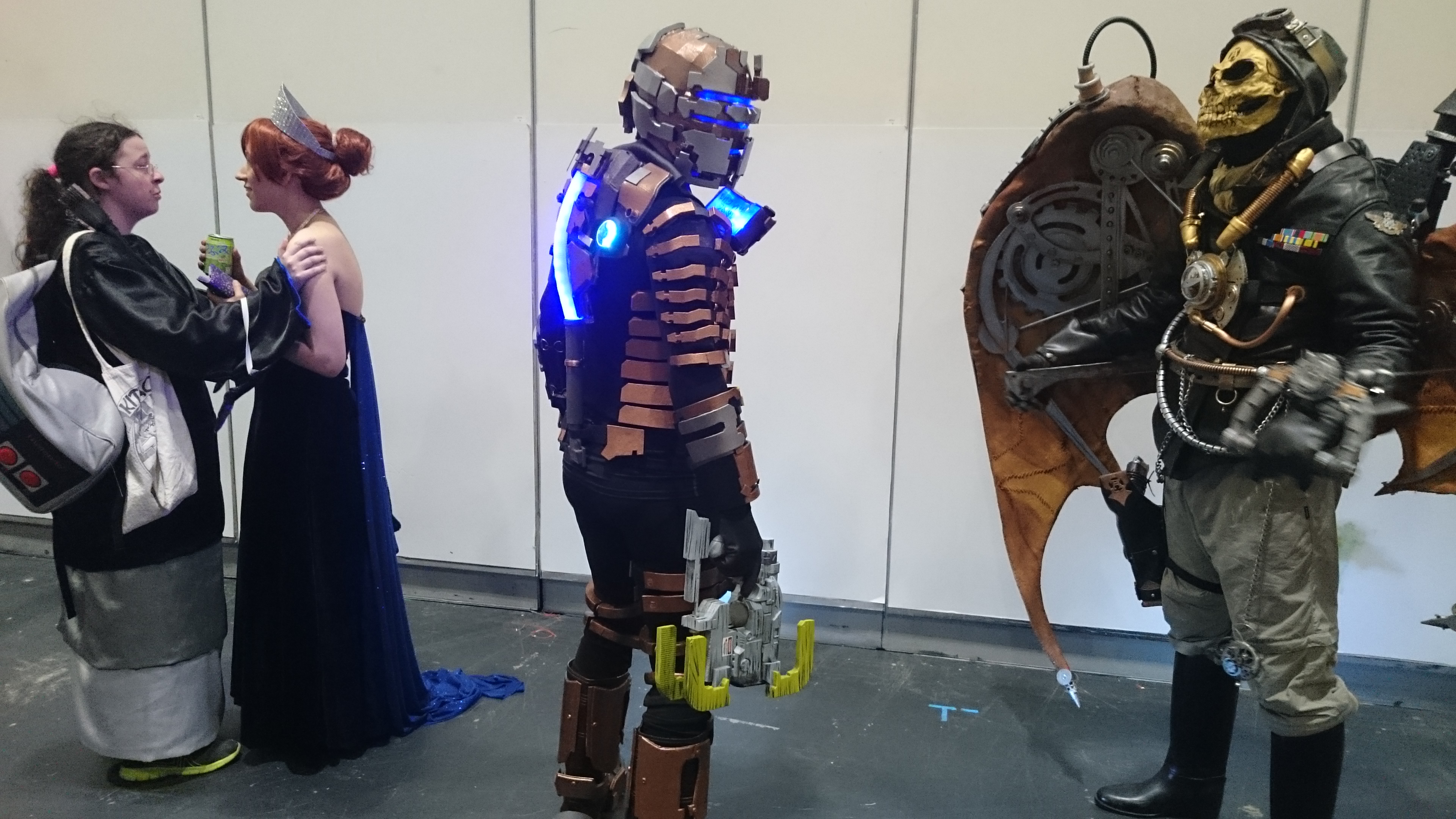 Then I entered the judging section. I was asked one question as the two prodded and poked my costume… “How did you make it?” I explained but you want to know, pop to my Dead Space build tab for more! {HERE} or My YouTube Dead Space 2 update video {HERE}

Then it was time to get some fresh air, so outside was the place to be. Issac was a hit with the media making it into some videos along with some great photo shoots by the famous MCM trees! 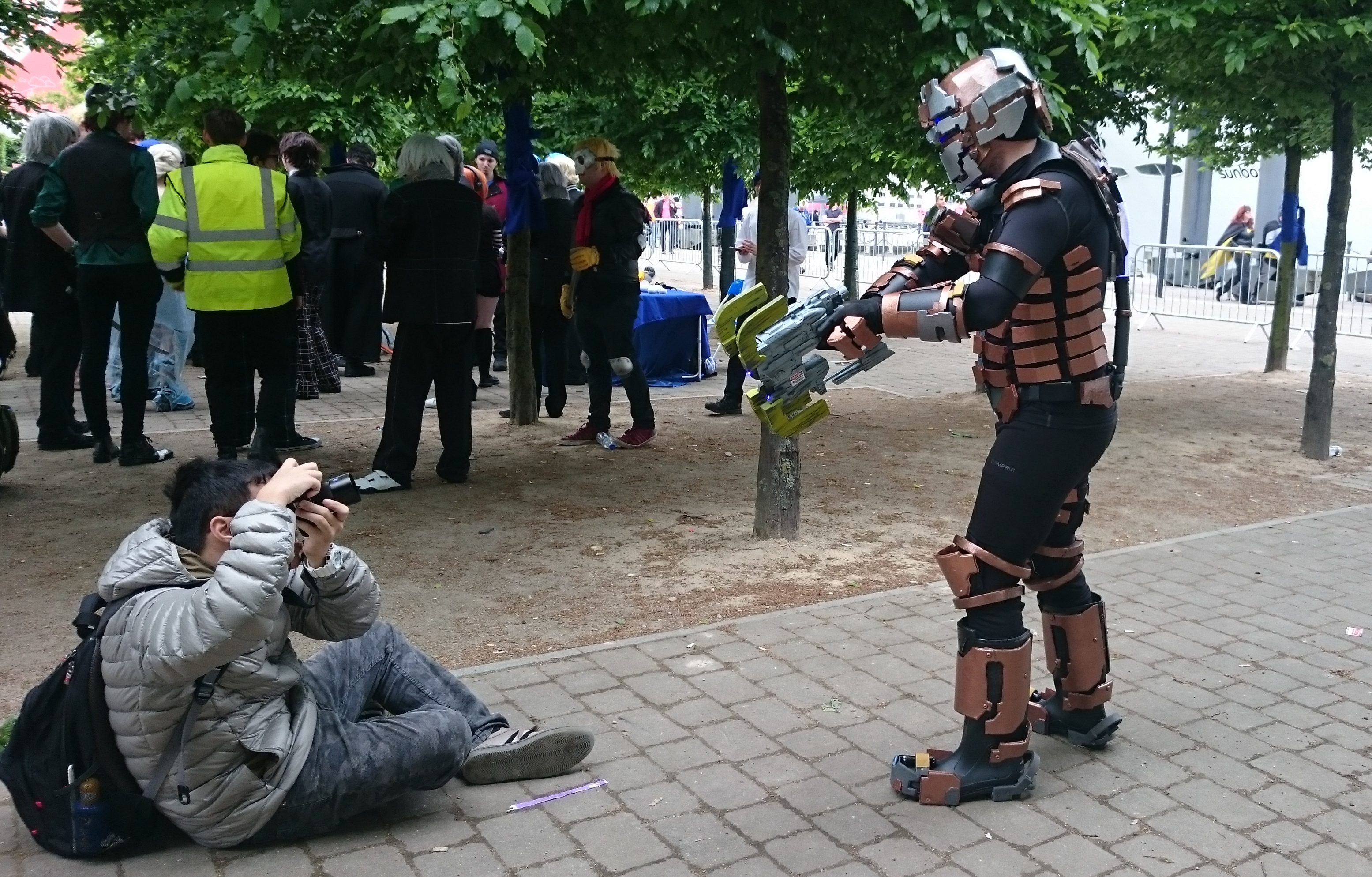 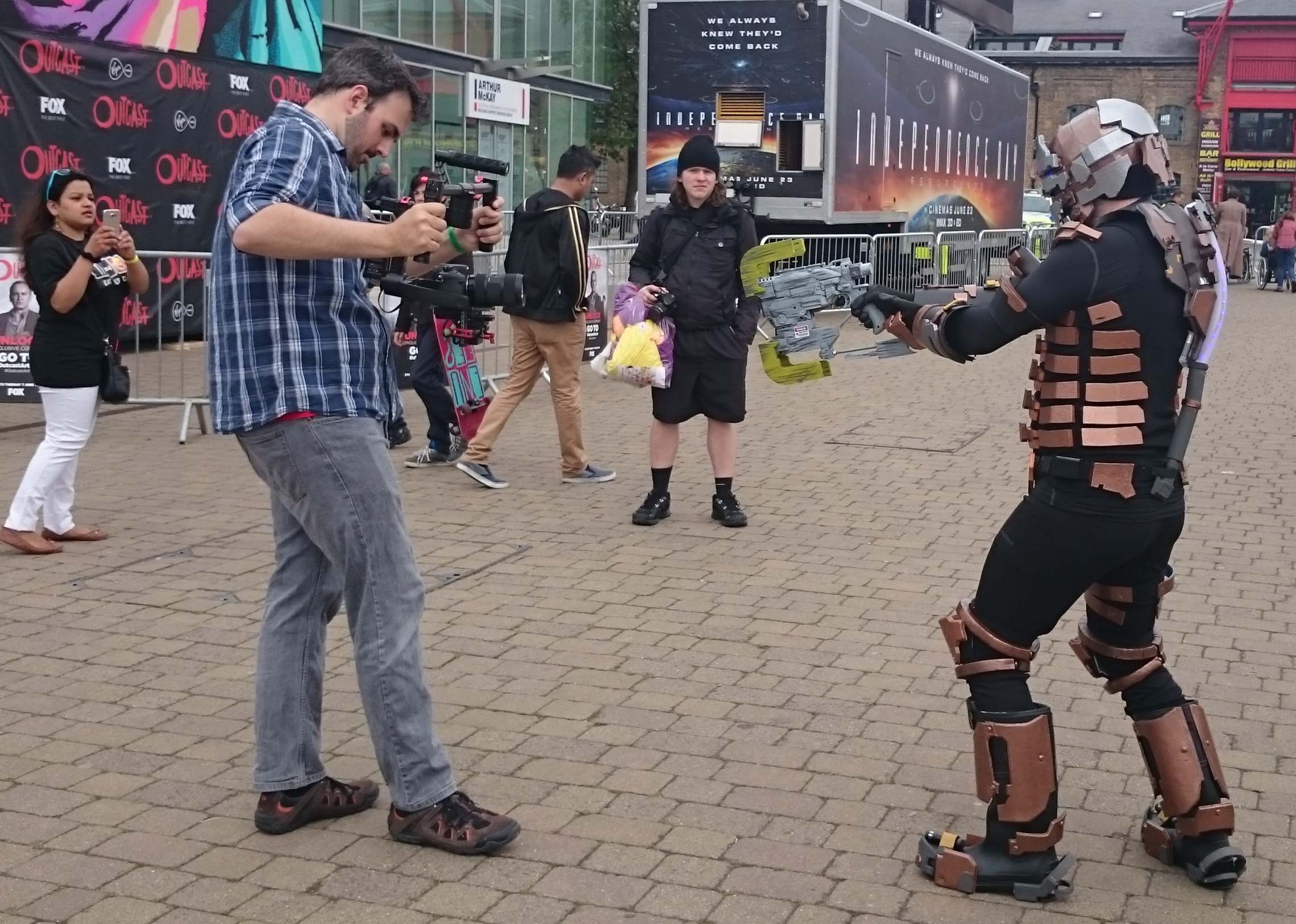 I then did a lap of the convention getting pictures and Hi5ing people until it was time to get up on the stage. I was feeling positive about getting a place as the costume was feeling great and my lights were all working brilliantly.  Then just before we were heading backstage one of the UK’s top male Cosplayers walks in in an unbelievable World of Warcraft costume. At this moment I thought “That’s that then…”

The masquerade was held in on the Gold Stage next to the front of the Excel Center. 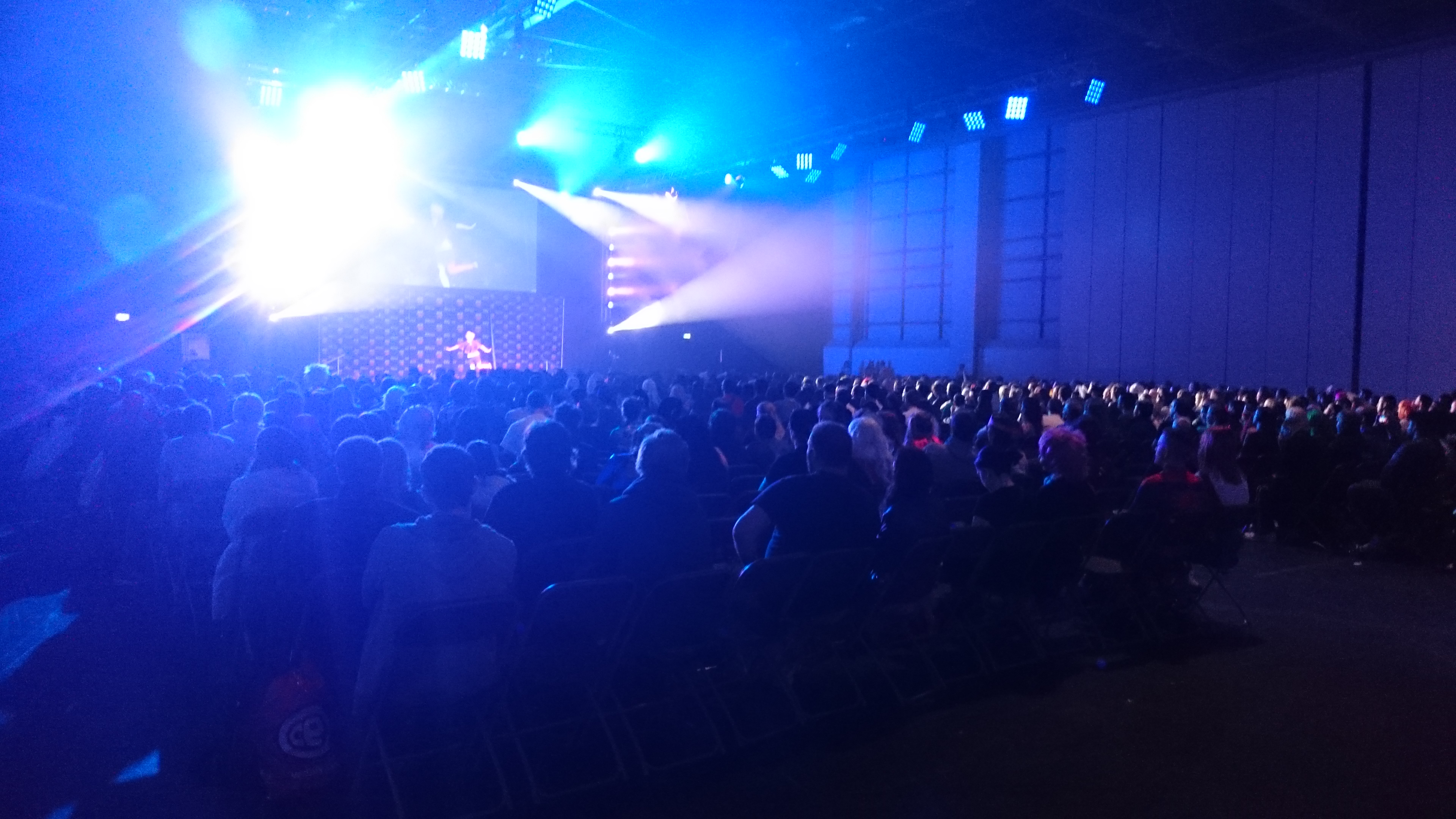 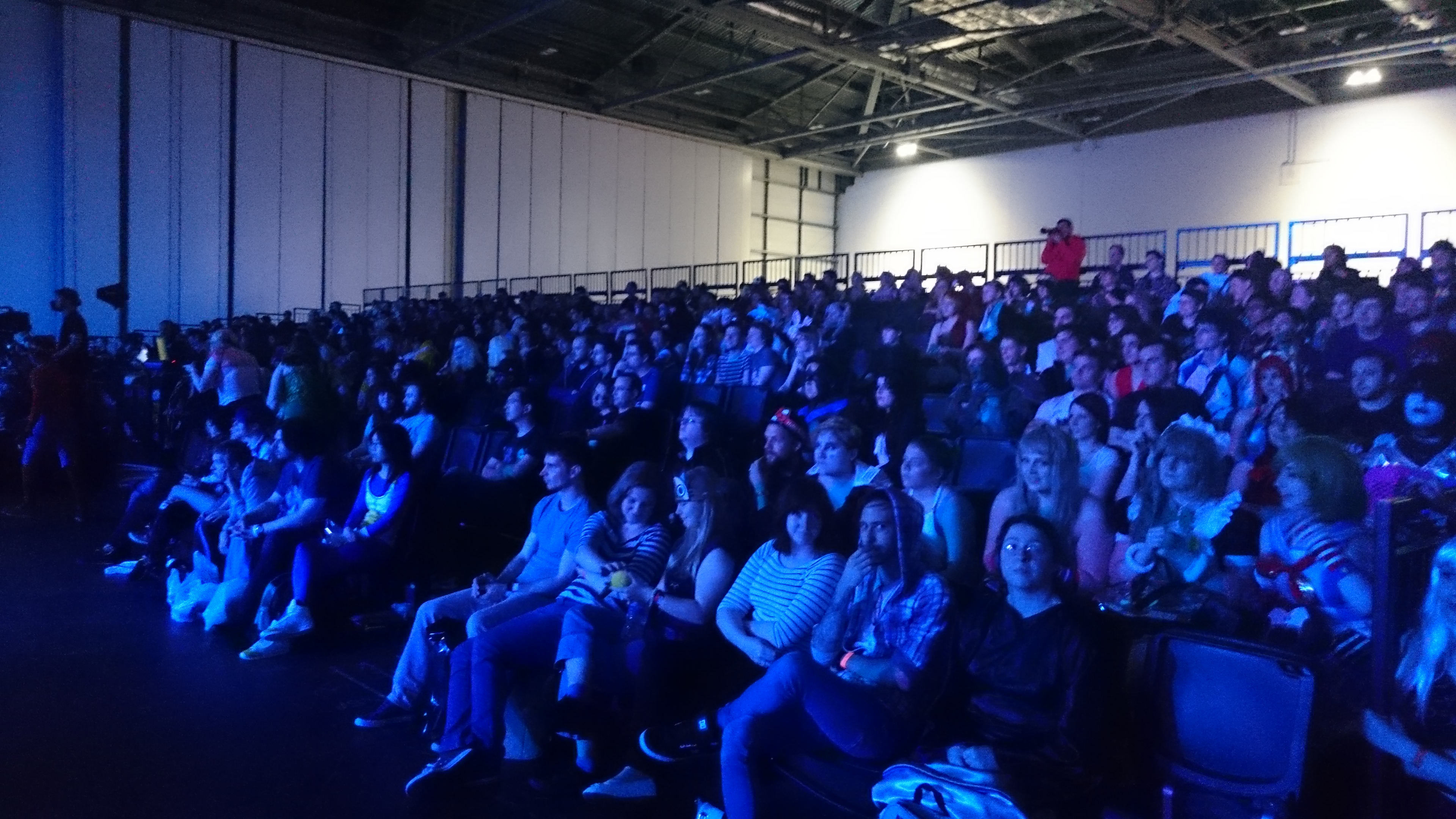 So here was our audience.  How will we do…. Here is my performance, enjoy!

On the last ‘stomp’ the toe cap fell off my right boot, total ‘Heroes of cosplay’ freakout moment went through my mind. Then I took place at the side of the stage to watch the last few cosplayers do their thing. The judges made their decision. I was not placed this year 🙁 but before I could run off crying, knowing I had let down my small island of Jersey I hear the best news ever! BlueJam77 had won a judges award!

So readers, head over to BlueJam77’s page and hit that ‘Like’ button! {HERE} After the media had finished with us we headed out of the Excel center with smiles across our faces!

Back at the hotel, we tackled the dipsy receptionist again then escaped the nearby hotel. All in all a fantastic weekend. We traveled home safely and the rain never fell until my costumes were back in storage.

That’s that. Issac will return to a con near you so please continue to #watchthisdeadspace